Submissions for acceptance in this category will be evaluated based on scientific merit, quality of design and control, and relevance to the fields of autism assessment, intervention, staff training, basic conceptual understanding, and program design. Additional consideration will be given based on the relevance of the research topic to the scientific literature/research base in the fields of special education, autism treatments, psychology, and behavior analysis. Consideration will be given to the degree that experimental control is demonstrated, including threats to internal and external validity as well as reliability of dependent variable measurement. Preference will be given to studies that include measures of inter-observer agreement for the dependent and independent variable, as well as data related to treatment fidelity.

Experimental/Quasi-experimental design including single subject designs and inter-group designs. These proposals will demonstrate systematic manipulations and test functional relations either between groups, across individuals, or within an individual.

Title of Poster Presentation: Comparing use of prompting strategies to teach picture labeling for two children with autism

Poster Description/Topic: This study was completed to compare the effects of two prompting techniques, full echoic and partial echoic, on the acquisition of vocal picture labeling for two children with autism. The study is a partial replication of work completed by Parr and LeBlack, 2011.

Subjects: Two school age students with Autism. Both students performed at Level 1 for picture labeling on the Competent Verbal Scale for Students with Autism, Elementary Level. Both students are vocal learners and have developed the ability to repeat what has been said to them. Informed consent from the student’s families was obtained and all personally identifying information for the children and their families has been withheld.

Study Design: The study includes an alternating treatment single subject design, replicated across the two students. Baseline data was collected on vocal labeling skills for three sets of three picture stimuli presented in a discrete trial format. For the first set each child was taught each item using a full echoic prompt. The second set was taught using a partial echoic prompt following one trial with a full echoic model of the response. For both conditions, each prompted trial was followed by an unprompted probe trial to assess acquisition. Each set was taught one time per day for 30 trials. The order of teaching was randomly varied throughout the study. The dependent variable, number of days to mastery for each item in the set, was defined through trial by trial data resulting in two consecutive days of 90% correct or better for each item in each set on unprompted trials. The independent variable for each condition was instruction through discrete trial instruction procedures and varying type of prompt presented by treatment condition.

Data Display: Data will be presented through an equal interval graph that includes baseline and treatment phase conditions. Separate data paths for each treatment condition will be shown for each student for treatment phase. Here is preliminary data for one subject: 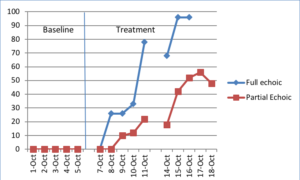